The 2014 Sochi Winter Olympics just wrapped up, and we had some things to say. A lot of things. (We also had to deploy an Emergency Avocado. Which worked!)

Medal Count! We are VERY proud of Team UK and their 4 medals! They did VERY well.

(Drinking game for this episode: take a shot every time Alina JUST HAPPENS to mention that Canada won the gold in both men and women’s hockey.)

Supporting LGBTQ athletes in Sochi and beyond: You Can Play Team.

Anonymous in Sochi, blog posts from an anonymous gay blogger who traveled to Sochi for this project. “The choice before me is a familiar one: Remain silent or speak for those who cannot.”

Jason Brown and the Hammer Shuffle. On Ice.

Yuzuru Hanyu is cooler than you

The article positing that Ashley Wagner’s selection was based on what Marta Karolyi would have done.

Surveillance in the showers! Not the best PR move, Russia.

Breaking out of the bathroom!

The beer fridge that only opens with a Canadian passport.

The US sent Canada some Congratulatory Beer. It’s not crap beer, which was really nice of us!

Gus Kenworthy and his puppies! NO REALLY LOOK AT THEM. Team USA and their puppies.

Russian billionaire Oleg Deripaska founds a dog sanctuary for strays in Sochi because his dog he had as a kid was a stray. (No one give Will Graham any ideas, okay?)

This is Commonwealth Clyde. He is terrifying. 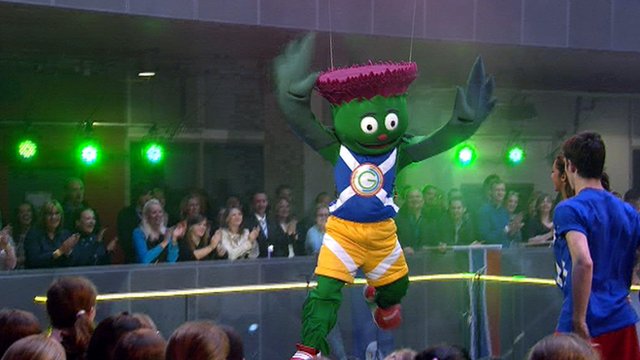 The Olympics will be back in 2 years in Rio and 4 years in PyongChang, and we’ll be back atcha next month with a Topic As Of Yet To Be Determined!